Kingston Wharves to Execute Over $1 Billion in Infrastructure Projects

Home >> Kingston Wharves to Execute Over $1 Billion in Infrastructure Projects

Kingston Wharves Limited (KWL) has announced plans to execute over $1 billion in infrastructural development projects in 2020.  The upgrading plans are part of a four-pronged strategy outlined by the terminal and logistics company’s CEO, Mark Williams, to boost its capacity and position for global opportunities.

“Infrastructure readiness through expanding, rehabilitating and developing our plant is a key pillar in our drive to achieve customer service excellence and realise profits,” the CEO said.

He noted that works on the first phase of a modular warehouse complex at Ashenheim Road in Kingston had commenced, adding that the project was aimed at preparing Kingston Wharves to seize opportunities in 3PL and cold chain logistics.

“The facility will feature dry and cold warehouse structures, with the first phase of the project focused on the construction of the cold storage portion of the operations,” the CEO disclosed, announcing that the site had already been cleared and construction works were slated to begin shortly.

With respect to other major infrastructural projects, the CEO reported that KWL recently carried out maintenance dredging on the seabed in the vicinity of its nine berths, and had allocated funds to effect repairs to one of its berths that was damaged by a vessel a few years ago.  Resources have also been earmarked for the installation of Cathodic Protection to prevent corrosion of the structural sheet piles along its berth face. Taken together, these projects will improve Kingston Wharves’ berthing capacity, safety, the longevity of the berths and assist in increasing berth productivity.

Another infrastructural project announced was the rehabilitation of the pavements on the Kingston Wharves main terminal.

Additionally, the CEO reported that the Company would execute a multi-million dollar integrated Electronic Security Management System to modernise the security and surveillance system across all Kingston Wharves facilities, including its main terminal.

“Security is paramount to Kingston Wharves. We already have robust security apparatus in place to protect the integrity of the cargo that pass through our terminal. The new enhancement measures will significantly strengthen those mechanisms and introduce new elements,” the CEO said. The improvements will entail the modernisation of the Access Control, Credential, Monitoring and Control, and CCTV Surveillance systems.

In giving details on the KWL’s other strategic imperatives, Mr. Williams said that the Company’s strategy included imperatives related to its process, people and profits, all aimed at enhancing excellence in operations and service delivery.

The company had already invested significant resources into digital technology, and would accelerate its digitalisation process to achieve greater efficiencies.

He said Kingston Wharves had introduced RFID (Radio Frequency Identification) to track, monitor and manage motor vehicles passing through its terminal for the domestic market and transshipment, as well as invested in e-payment platforms to promote ease of business and as part of its COVID-19 management strategy.

Kingston Wharves’ digitalisation push has also made the organisation an active part of the Port Authority of Jamaica’s Port Community System which provides an electronic single window for the clearance of cargo.  Through the PCS system, KWL, the Port Authority, the Jamaica Customs, Freight Forwarders, Agents and others can share data to simplify service, reduce paperwork and prevent duplication of efforts for customers clearing cargo.

As it relates to its focus on people, the CEO noted, “Our emphasis is on attracting, recruiting and retaining a competent world class workforce while fostering a mind-set of accountability, commitment and excellence among our team members.”

With respect to driving profits, Mr. Williams explained that the Company has built a solid foundation over its 75-year history and will be guided by “boundaryless thinking” to deliver profits under three broad headings—strengthen, expand and diversify.

“In strengthening and expanding, our objectives are to compete regionally in multi-purpose, multi-user terminal services, and leverage a strong balance sheet to expand our footprint into nearby territories and integrate vertically while competing globally with a full suite of 3PL logistics services,” the CEO elaborated.

He added that the company would move to further diversify the cargo types and services offered, enhancing its position in the new normal.

3011- The Kingston Wharves team conversing after the recent Annual General Meeting held at its offices at the Total Logistics Facility, Newport West. 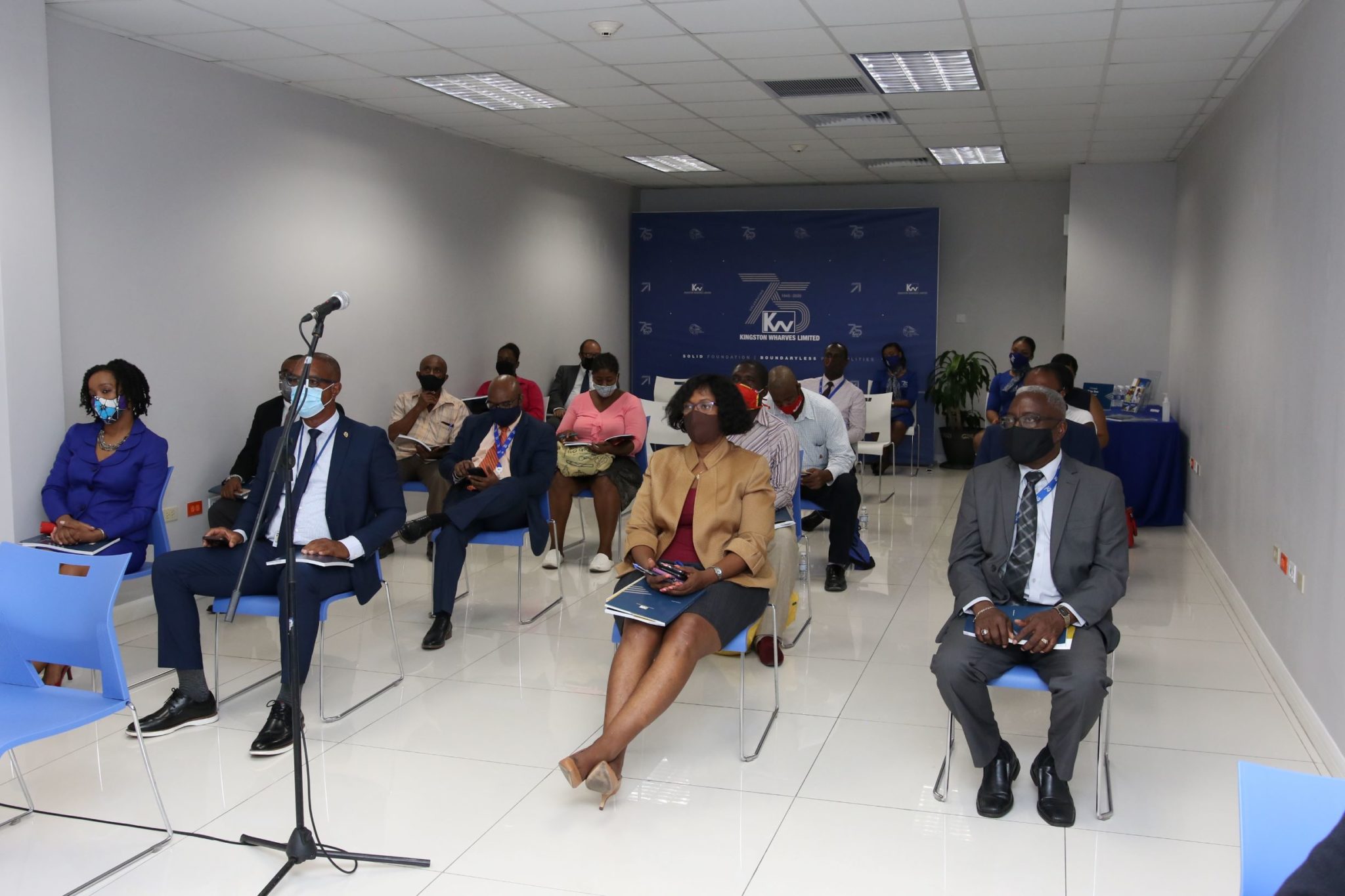