The atmosphere at the gardens of the Jamaica Pegasus was one of celebration and admiration as patrons paid tribute to Grantley Stephenson, the recently appointed Deputy Chairman of Kingston Wharves Limited who retired as CEO after 16 years in the position, and officially congratulated Mark Williams who was promoted to the post of Chief Executive Officer of the Caribbean’s leading multi-purpose port and terminal operations company.

Kingston Wharves Limited staged the Leadership Transition Cocktail to honour the two leaders and to officially pass the baton, following the announcement of the Board of Directors that took effect on January 6, 2020. Well-wishers were drawn from the shipping industry and the wider business community, including KWL Chairman Jeffrey Hall; Jamaica Manufacturers and Exporters Association President Richard Pandohie; Port Authority of Jamaica President and CEO Professor Gordon Shirley; Shipping Association of Jamaica President and Kingston Wharves Director Charles Johnston; SAJ CEO Trevor Riley; Commissioner of Customs Velma Ricketts-Walker, Directors of the Board of Kingston Wharves Ltd and other industry and business leaders and partners.

“Grantley has played an inning of rare distinction. There is little doubt in my mind, that when the modern history of the Jamaican maritime sector is written, a substantive chapter will be devoted to the work of this distinguished son of the soil,”   noted Professor Gordon Shirley as he chronicled the achievements of Grantley Stephenson.

Professor Shirley declared, “Thank you Grantley St. John Stephenson for an outstanding period at the crease and for the contributions made to the maritime and shipping sector of our island,” adding, “in my recent discussions with him, Grantley is today more optimistic than ever about the maritime sector in Jamaica and its ability to take advantage of the opportunities in the global economy.”

He hailed Mr. Stephenson for a carefully crafted succession plan: “Grantley is now handing the baton of leadership to Mark Williams, and a group of experienced, well-trained and globally-exposed young executives.”

Shipping Association President and Kingston Wharves Director Charles Johnston, in his toast to Mr. Stephenson, recalled the history he shared with the former CEO, including when they were on opposing sides of an issue in the shipping industry in the 70s, but with no longstanding discord moved on to be strong industry partners.

“We formed a new shipping line and took back the banana trade, and Grantley joined me at Jamaica Freight as the CEO of the Agency….This was a 10 year window, during which time I grew to appreciate Grantley’s management style—calm, professional, steady, structured and encouraging to his employees,” Mr. Johnston stated.

“In 1998, Seaboard Marine formed a local company in partnership with Jamaica Freight and of course Grantley became the new CEO of that new company. This helped to establish Seaboard as the premier carrier out of North America, and that is still so today.”

“While at Seaboard Jamaica, Grantley was President of the Shipping Association of Jamaica, for five consecutive years; which is something that has not been repeated, and that shows the respect of his peers,” Mr. Johnston said, highlighting just a few of Mr. Stephenson’s achievements.

Chairman of the Kingston Wharves Group Jeffrey Hall in his welcome, lauded Mr. Stephenson for his sterling contribution to the Group and the KWL team, noting: “We never forget that you are at the frontlines of our operations; you are trusted with our customers’ cargo whether it be luxury cars, grain, steel, consumer goods or hazardous materials, and far as we are concerned…you are Jamaica’s finest, you are the best in the business.”

He thanked KWL’s Government (including Jamaica Customs and the Port Authority), private sector and trade union partners and other stakeholders for their partnership.

“We are going to spend tonight saying a lot of nice things about Grantley Stephenson. But I want you to know that he believes and I believe that he could not have done it all without you,” the Chairman stated.

Encouraging continued support for Mark Williams as he assumes the leadership of the organisation, Mr. Hall underscored that Mr. Williams had the full support of the Board.

The Chairman later presented a citation from the Kingston Wharves group to Mr. Stephenson, as Master of Ceremonies Paula-Ann Porter-Jones read the accolades.

In His response, Mr. Stephenson reminisced about his journey in shipping, noting, “Above everything else, I value the relationships I have built over the years, locally, regionally and international, in all sectors in which I have worked. These relationships have stood the test of time, despite differences over the years.

“One of the most important things I have learnt over the years is to interact and co-exist with partners with differing views and interests, but at the end of the day to maintain respect, positive friendships and productive working relationships that advance the agenda of the company and industry.

Mr. Stephenson said that over the years weighty decisions were taken to advance the development of the company, and despite fierce debate on some occasions, measures that were needed to build consensus and the key steps to promote the growth and profitability of the company, were taken.

He encouraged Mark Williams and the team to continue to have a bold vision and to be innovative in the company’s product offerings and service delivery, expressing confidence that his generation and those before have laid a good foundation for the current team to build on.

“In Mark I am assured that Kingston Wharves is in good hands, and he has the support of a strong and committed executive team, managers and line staff.  Mark knows the business; he has established solid relationships, and he has the vision and understanding of the untapped potential of the company to take it to the next level.”

After Mr. Stephenson concluded his presentation, there was an official baton hand-over with Mark Williams.

In his address, Mr. Williams thanked Mr. Stephenson for his wise and committed stewardship over the years.  “When you look at his track record in people development, mentorship, succession planning and sports (including Under-15 Cricket), you see that this was a man not just focused on profits, but also on nation-building,“ he said, adding: “He has moved Kingston Wharves from a local company to a globally recognised company.”

Mr. Williams underscored that 16 years ago when no one was speaking about logistics, Grantley Stephenson had a vision that Jamaica could become among the best players in the global logistics business.

In sharing his vision for the organisation, Mr. Williams said that since assuming the position of CEO in January, he has been encouraging the team to embrace boundaryless thinking.

Underscoring the importance of partnerships in the shipping industry, he pointed out that KWL will continue to rely on its partners for mutual growth.

“We are looking to build a company that will not stand on its own, but one that embraces all business partners and associates,” he noted. 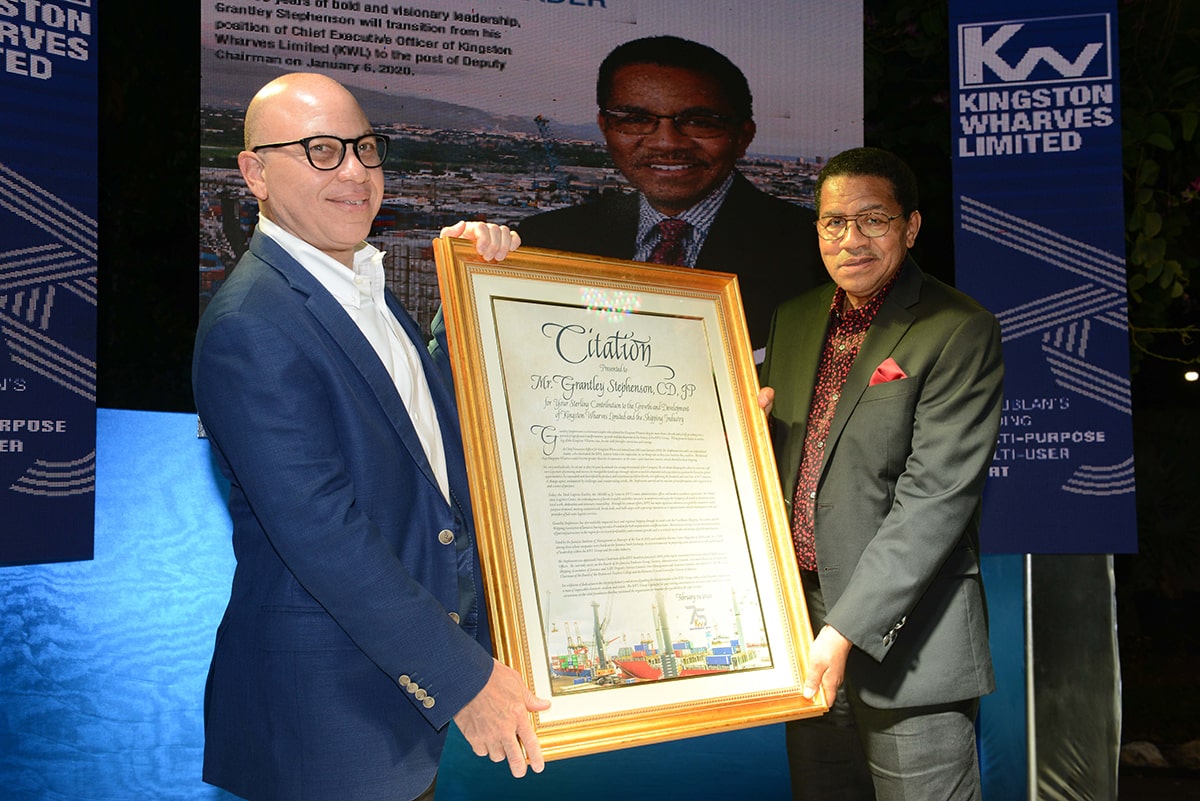 Kingston Wharves Chairman Jeffrey (left) Hall presents a citation to Grantley Stephenson for his sterling contribution to the Company and the wider shipping industry. 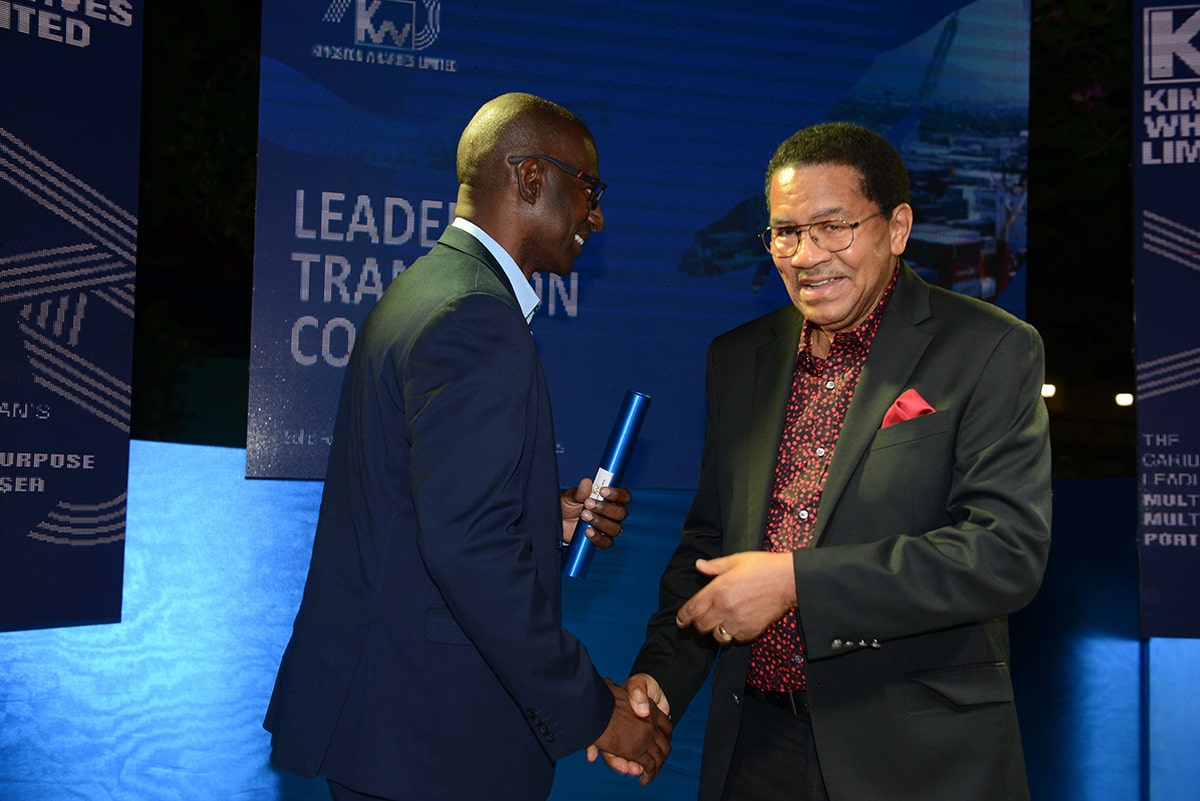 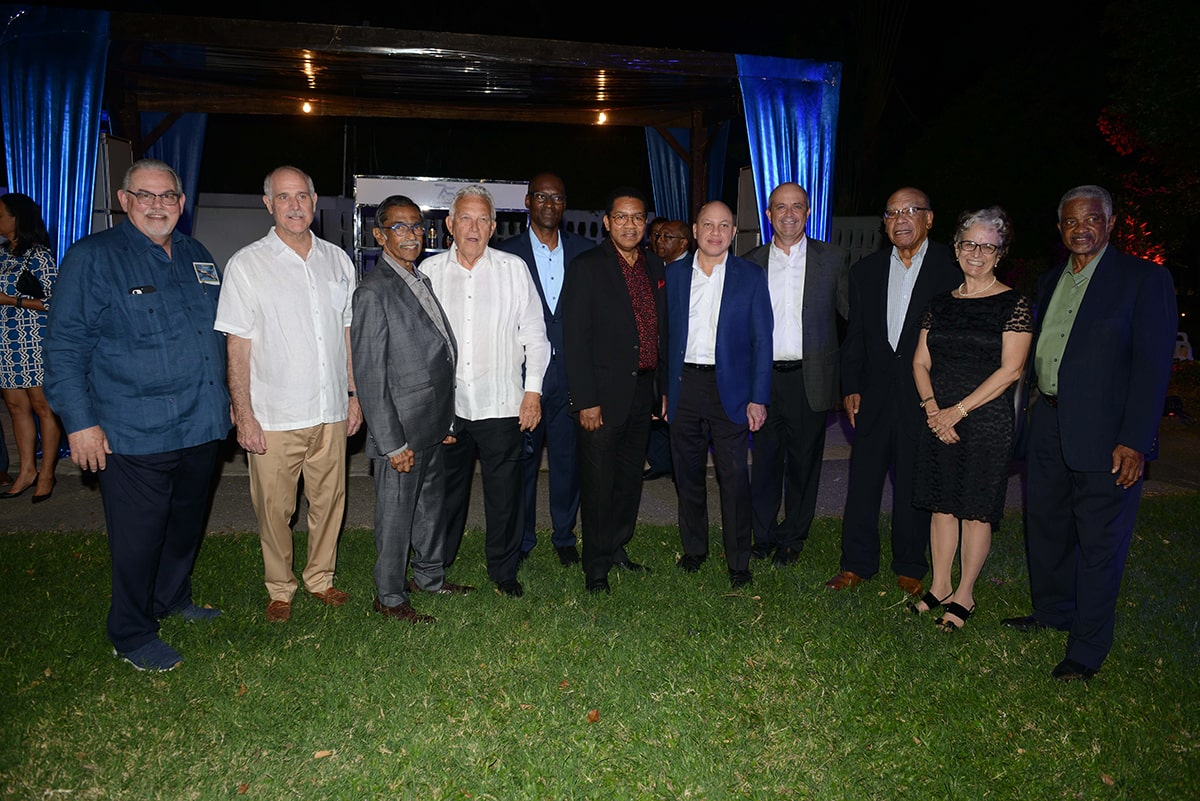