Work to construct new drainage on a section of Port Bustamante in Newport West is over 90 per cent complete.  This disclosure was made as officials of Kingston Wharves toured the drain improvement project along with personnel from the National Works Agency (NWA) and the Shipping Association of Jamaica (SAJ) recently.

Kingston Wharves is funding the project to the tune of $100 million. CEO of Kingston Wharves Grantley Stephenson explained that the works represent the second phase of its drainage improvement project. Under the first phase, carried out between 2015 and 2017, Kingston Wharves expended US$1.6 million to improve drains in the vicinity of its Total Logistics Facility (TLF) in Newport West.

Mr. Stephenson said the works involve constructing a new drainage system on a section of the Kingston Wharves terminal and modifying connecting drains in the area where 2nd and 3rd Street intersect 9th Avenue. Those drains link Kingston Wharves’ premises to the wider drainage network in Newport West.

“For a number of years, business operators, customers and other stakeholders in Newport West have been adversely affected during the periods of moderate to heavy rainfalls, due primarily to the accumulation of storm water surface run-off which has resulted from restriction in flow. These flow restrictions have been influenced by a combination of undersized, deteriorated and collapsed drainage network within the Newport West region which dates back many decades,” he explained, adding that human factors such as improper waste disposal have compounded the problem.

The engineering study and design work for the project were completed earlier this year and construction began in July 2019.  “The development is a well-needed complement to the Government’s major roadworks and planned drain improvement. As part of the works, drains will be equipped with silt traps and grease chambers to prevent garbage and solid waste from entering the harbour,” Mr. Stephenson stated.

“Kingston Wharves is doing its part to alleviate a situation which poses a problem to the entire community,” Mr. Stephenson said.

Kingston Wharves has been engaged in ongoing consultation and collaboration with the State agency through a series of meetings, discussions and NWA’s review of the project’s design plans. Kingston Wharves’ drainage works will fit into planned improvement to the wider drainage network in Newport West. 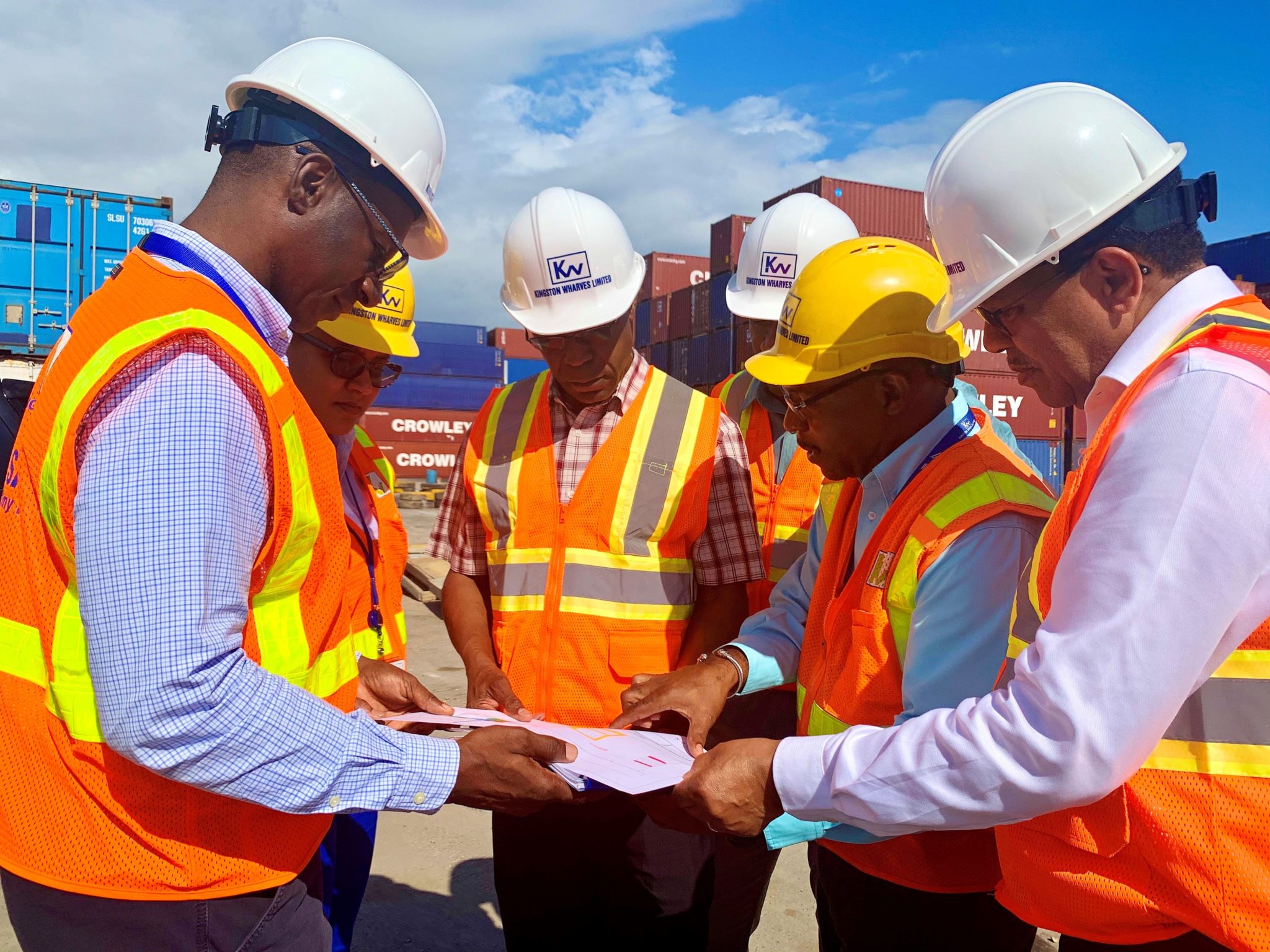 Looking over plans:  Officials of Kingston Wharves, National Works Agency and the Shipping Association of Jamaica, look over plans for the drainage constructions works underway on a section of Port Bustamante, Newport West. The works, which are over 90 percent complete, are being funded by Kingston Wharves to the tune of $100 million. KWL’s CEO Grantley Stephenson (right) and NWA’s CEO E.G. Hunter (third Left) were among those present.  Others from left are, KWL’s Chief Operating Officer Mark Williams, Group Chief Financial Officer Clover Moodie; Director of Regional Implementation and Special Projects at NWA Varden Downer, SAJ’s Executive Director Trevor Riley (not pictured) and KWL’s Facilities Manager Michael Arbouine.